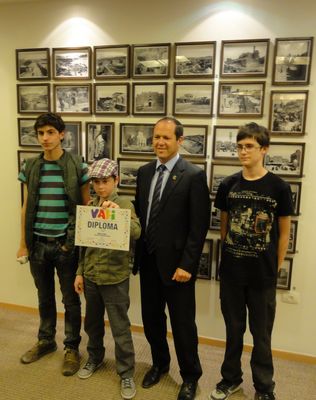 Aharon Engel, aged 11, from the WIZO Kagan Center won first prize in an international competition of animated films Creator of the film, Aharon Engel, aged only 11, learns in the only studio in Israel for pedagogic animation which is operated by WIZO in Jerusalem.

Chairperson of the World WIZO Executive, Professor Rivka Lazovsky: ‘The real prize is the proof that it is possible to succeed, at any age, with self confidence and work. WIZO is proud of Aharon’s success and will continue to teach and nurture generations of children so that they can realize their full potential

Aharon Engel, aged 11, from the WIZO Kagan Center for Youth and Communications, in Jerusalem, won first prize in an international, high rated competition of animated films for the young. The ASIFA competition, took place last week in Croatia, and fifty seven countries took part, from all over the world. Out of the one hundred and three films which were screened during the four days, Aharon’s animated film ‘Wild Kids’, from the WIZO Kagan Center for Youth and Communications, took first prize, in the category of the best film of adolescent youth 19-20.
Aharon was the only child who received a prize at such an early age, especially the first prize.

Three animators, amongst the leading in the world, made up the panel of judges, headed by the animator, Muhammad Gazla, from Egypt, who is head of ASIFA in Egypt. Muhammad was very impressed by the team of the Israeli studio, highly complimented them and even enjoyed a meal with them.

The content of the film, which lasted about six minutes, was in the form of graffiti which outlined Aharon’s personal story, as a new child who comes to the studio and has to cope with the problems of acclimatizing, his fears and apprehension – until he is accepted.

The film is still being shown around Europe in other events. It has not yet been posted on the Internet but should be in the near future.

This week, Aharon and the team which prepared the film, and the team from the WIZO Kagan Center, with its Director, Yochai Rottenberg, and the Art Director, Max Epstein, met with the Mayor of Jerusalem, Nir Barkat, who thanked them for their contribution to the development of animation studies in Jerusalem, and especially for their contribution of the children and youth of the city.

The WIZO Helena Kagan Community Center for Youth and Communications, in partnership with Jerusalem Municipality:

The WIZO Helena Kagan Community Center for Youth and Communications works in partnership with the Jerusalem Municipality in order to nurture social and cultural leadership amongst the youth from the Katamonim areas, through communications. The Center has a television studio, digital and computerized editing rooms, an animation studio for children and youth, and a community educational radio studio which transmits under a license of the Ministry of Education, on FM 106. Hundreds of children and youth, some of whom are new immigrants, come every day to the Center, which they see as their second home and which gives them the tools to succeed in their studies and to fit in society. The local youth council also operates from the Center, counselor/teacher army courses advance voluntarism, and there is a Learning Center for Ethiopian students.

The studio is the first of its kind, for education animation, in Israel in cooperation with the WIZO Helena Kagan Community Center for Youth and Communications and successfully works with children from the area. The Center is located in the heart of the Katamonim, and many of the children are from low income families or families considered to be at risk.

The studio operates according to pedagogic principles and establishes educational processes when working with the participants. Top class artistic professionals, from all over the country, work with the children giving them professional advice. A high number of experts, on developing modern educational systems, agree that today’s society has a problem of lack of creativity and a deficiency in creating new ideas.

Educational Pedagogy, is an original, methodical approach which is proving itself in facing this problem for over thirty years. This is done through creating animated films, which provide an ideal creative ‘laboratory’, for all ages. During the production of the film the child creates, draws, sculpts, dubs and learns technology. He also learns to plan stages, to cooperate and to put forward his opinion, to appreciate the pros and cons of the solutions and those of others.

Searching for methods and choosing strategies expands the cultural magnitude of the child, and opens within him interest and respect for others.

This approach is open to all ages, can be done with family, in a host of combined projects.

Max, the Art Director of the studio, explains that the animation studio is not just another course. It is both a home and a place of work. ‘We do not have teachers and pupils – we have young artist and experienced artists. The working processes are carried out in full partnership between one another. We are partners in an experience, sharing information- not only learning. The teaching artists both teach and learn from the children, their feelings, their dreams. This is the starting point in every one of our films.’

He says, ‘Animation is a universal language, together with our educational approach, which leads to outstanding results!!! We not only improve abilities and thinking processes but we open cultural dialogues and help to solve personal problems. No child leaves the studio the same as when he entered.

Professor Rivka Lazovsky, Chairperson of the World WIZO Executive, congratulated Aharon and the team from the studio on their impressive win saying that the real prize is the knowledge that they can go far at any age with self confidence and work. WIZO is proud of Aharon’s success and will continue to teach and nurture generations of children so that they can realize their full potential.